2016 Opening Round Photos and Results

It was a very warm weekend for the winter sport of hockey and quite a few of the valiant Norths players lamented this fact. First round as well and it was a tough day at the office for all players.

First off the cards Sunday morning the B Grade Men and B Grade Women (White) played in Albury.

The White team had a solid win, the young members of the team playing well and pushing Beechworth hard and getting up.

The B Grade Men didn’t fare as well against United. The effort was there, but the results were elusive. They came second on the day:

B Men defending yet another short corner – Will on the lead from the goals, followed by Beau. Brandon Purcell, Mark Hooper and Yours Truly huddling in the goals

Shooting over to Wodonga for the B Grade Women (Blue)’s game against Wodonga in the sandpit. The Blue girls came out cracking, pushing Wodonga on to the back foot very quickly, while short of players. The cavalry arrived from the White team and for a while we had a very fluid forward line (i.e. no-one knew where they were!) We sorted it out eventually and broke the ice. Some solid play in the second half and the girls trotted off the field 4 – 1 winners:

B Grade Women Blue, with kids and coach. Hot, tired and sweaty but happy!

Back to the Albury Hockey Centre and the A Grade girls were cutting loose on the field. A very young team combined with a few old soldiers and they had a successful campaign winning 3-1

The final match up was Magpies and the A Grade Men. A hard fought game, 3-2 down at half time the boys pushed very hard in the second half. Unfortunately fate was unkind and the men went down 5-4 in a great game. 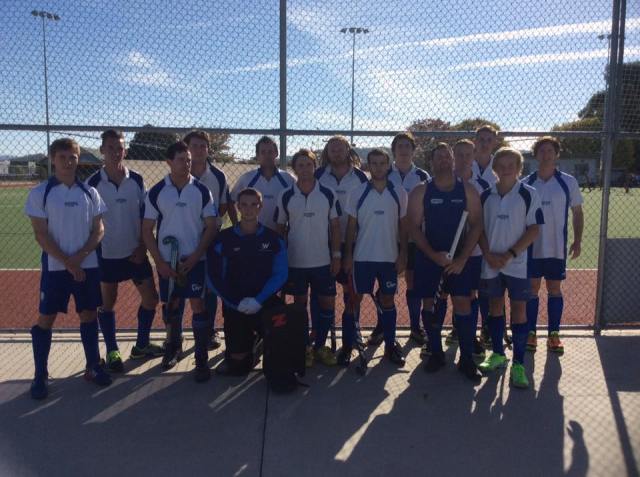 A Grade Men – pre-match and fresh as a daisy.

A good weekend start for the club. Let’s roll into next week!